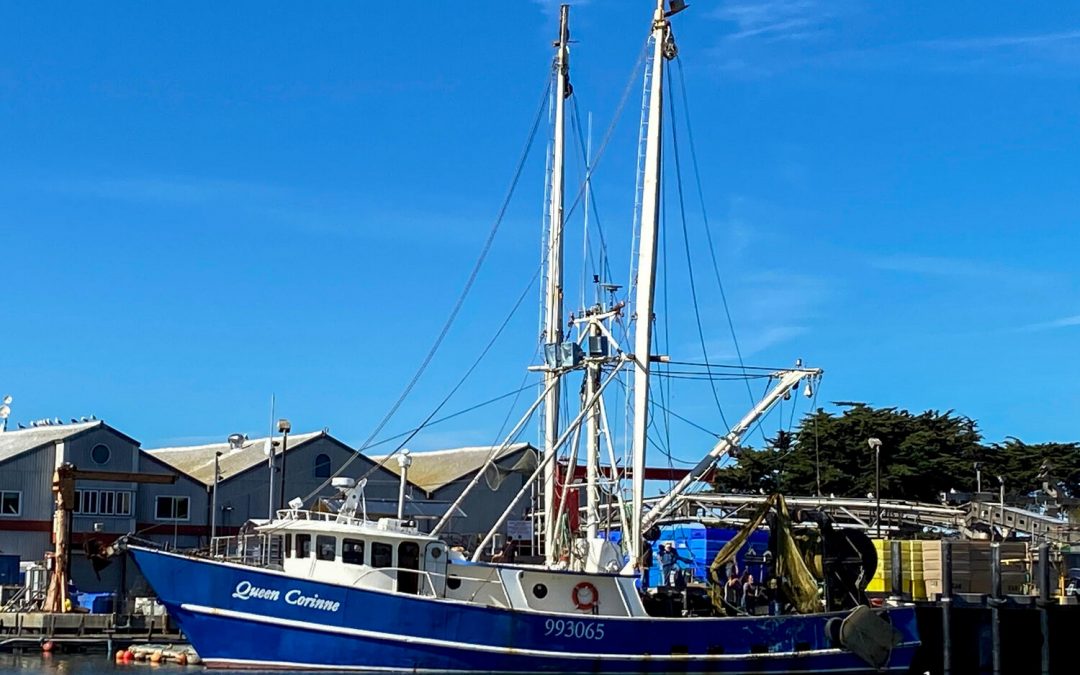 Lusamerica is helping revitalize the West Coast groundfish fishery with their new partnership with local fishermen.

The F/V Queen Corinne pulled into its new slip in Moss Landing late last year. This marked the first time in several years that a groundfish trawler is actively landing rockfish and flatfish like Dover sole in Monterey Bay — and an important milestone in the recovery of the West Coast groundfish fishery.

The groundfish fishery, a catch-all name for more than 90 different fish species living on or near the bottom of the ocean, has seen its highs and lows over the last 50-plus years. At the low point in 2000, the federal government declared the fishery an economic disaster, which closed the fishery completely for a time. A federal buyout to reduce the number of boats on the water, significant area closures, and strict catch limits ensued, as well as an entirely new management system in 2011. By the mid-2010s, most stocks had fully recovered, and today, the West Coast groundfish fishery is celebrated as an environmental success story.

With the arrival of the F/V Queen Corinne, there’ll now be a supply of sustainable yet high volume groundfish throughout the year to compete with low-cost imported fish found in most grocery stores and large retailers. Both the markets and fishing grounds are different than those of high quality, premium rockfish, sablefish, and halibut harvested nearshore by hook-and-line fishermen.

“Groundfish are the glue that keeps the processors running when there’s no crab or salmon,” says Bob Dooley, Monterey Bay Fisheries Trust Board Director, and Pacific Fisheries Management Councilmember. “It’s not a glamorous fishery, but its consistency keeps the fishing economy going year-round.”

The F/V Queen Corinne is owned by Scott Fosmark, a fifth-generation fisherman from Monterey, who grew up fishing on his father’s boat for albacore, salmon, and swordfish. While Fosmark went to California Polytechnic State University and embarked on a career in financial services, fishing was still in his blood. He started Fosmark Fisheries, LLC, and purchased his first boat, the F/V Yaznak, in 2012 and the F/V Queen Corinne in 2015.

His boats have fished primarily for pink shrimp and Dungeness crab out of Brookings, Oregon, but for the past five years, Fosmark has been strategizing ways to return his operation to Monterey Bay. In partnership with seafood buyer and processor Lusamerica Fish, Fosmark has been working to bring economic viability back to the groundfish trawl fishery in Monterey Bay.

“The fish are not the problem—the stocks are mostly rebuilt all over the West Coast—but there’s a lot of obstacles to getting into the fishery,” Fosmark said of the West Coast groundfish trawl fishery, which targets a diverse group of species including Petrale sole, Dover sole, flounders, rockfish, lingcod, sablefish, and more.   “I have a good boat, a good crew, and a good team — I think we can be successful here at home.”

Trawling for groundfish is one of the most closely managed fisheries in the United States, which carries with it many regulatory costs. Area closures, gear innovations, science-based quota systems, and other measures protect sensitive marine habitat, reduce bycatch, and ensure every pound of fish is accounted for. For example, trawlers are only allowed to operate in carefully designated trawl grounds (primarily sandy bottoms) to minimize habitat damage.

Trawlers must also pay more than $500 per day to have a federally trained human observer on their boat to ensure they do not catch a pound above their quotas—if they do, they must stop fishing or lease quota from someone else. Management measures like these ensure low bycatch and limit the fishing effort to sustainable yields, but these measures are expensive, and quotas can be costly to purchase and lease. Scott is able to lease some of the quotas he needs at a reduced rate via the Trust’s Quota Leasing Program.

“It’s a new venture, the operating expenses are unusually high, the price for the product is unusually low, and the profit margins are very thin,” Fosmark said. “I’ll be able to make this work. It could be a very good thing because it’s very consistent.”

The F/V Queen Corinne was met with alarm by some in the Monterey Bay fishing community when it arrived in November, as some feared the 73-foot steel vessel would negatively affect both fish stocks and price. But Fosmark says his boat is fishing for different markets and catching fish in deep water the small boat fleet doesn’t operate in (trawling is prohibited within the waters of Monterey Bay). Also, there isn’t a fleet of large boats aiming at Monterey Bay; the fishery would be at capacity with just one or two more vessels, he says.

“I’m not stepping on any toes. I’m just filling a market that hasn’t existed for years,” Fosmark says. There are different types of markets that need to be filled, and trawling fills the need for high-volume catch headed for Costco and Safeway — right now, that market is being filled by a lot of imported products,” he continues.

Bottom trawling has historically carried a negative connotation among some conservationists and consumers, but nearly two dozen trawl-caught species are now considered “Best Choice” or “Good Alternative” by the Monterey Bay Aquarium Seafood Watch, and the fishery is also certified sustainable by the Marine Stewardship Council (MSC). Scientists, fisheries managers, and many advocates see carefully managed trawling as an environmentally friendly method of harvesting sustainable seafood.

“When you consider target catch versus bycatch, this fishery does very well,” says Shems Jud, director of Oceans Technology Solutions at the Environmental Defense Fund. “In terms of impact on habitat, fishermen are not fishing willy nilly; they have their spots and avoid sensitive areas with pinnacles and rocky reefs.”

Click a category to view recipes by seafood or news from our blog.